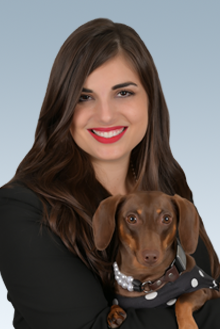 Lauren M. Pulido is an Associate in the firm’s Tampa office. Ms. Pulido was born and raised in Tampa, Florida. Her grandparents emigrated from Cuba in the late 1950s, and she was raised in a Cuban household speaking both English and Spanish from a young age. Ms. Pulido received her Bachelor of Science in Business Administration with a concentration in Business Law from Boston University. While pursuing her degree, Ms. Pulido participated in off-campus programs such as the Los Angeles Internship Program as well as the London Internship Program where she interned with a solicitor’s firm specializing in employment law.

Ms. Pulido’s Juris Doctor is from Stetson University College of Law. She was recognized with the William Blews Pro Bono Award for over 120 hours of service during law school as well as a Student Leadership Development Certificate for participating in over 10 leadership programs during law school. Additionally, Ms. Pulido participated in several study abroad programs such as Granada, The Hague, and London and volunteered as a Study Abroad Diplomat during her final year of law school. Prior to joining the firm, Ms. Pulido handled commercial landlord-tenant cases, immigration, Plaintiff’s personal injury, and commercial litigation before making the transition to the defense of healthcare providers.

Outside of work, Lauren (otherwise known as “Ren” by her close friends) enjoys baking, walking her dogs Stella and Charlotte, traveling, paddle boarding, and photography. Ms. Pulido is also an active member of the Junior League of Tampa. Upon completing her provisional year, Ms. Pulido was awarded with the Junior League of Tampa Provisional Kids in the Kitchen Servant Leader Award for the 2017-2018 year. Ms. Pulido served on the grant writing committee for the 2018-2019 year and was a contributing writer to The Sandspur for the 2019-2020. She served as the League Resource Liaison to The Sandspur Committee for the 2020-2021 year and will serve on the Legal Committee this upcoming year.

United States District Court of the Middle District of Florida